Pachamama Terere is a perfect combination of organic Ecuadorian ilex guayusa with herbal additives derived from organic farming. The first is lemongrass. Its slightly acidic aroma harmonizes perfectly with the holly, enhancing the natural qualities of the infusion. The whole thing is completed with mint , which introduces a refreshing note to the mix. Pachamama Terere is distinguished by perfectly selected ingredients in balanced proportions. Its crisp nature means that we recommend it primarily in a chilled form. The enigmatic term "terere" refers to this. Traditionally, this is how cold brewed mate tea is called. The infusion will be a healthy alternative to energy drinks or coffee. Apart from its energetic properties, it is characterized by numerous pro-health values. Lemongrass is an invaluable support for metabolism and a source of vitamins. Mint is recommended for indigestion. What's more, it has antibacterial and antiviral properties. Pachamama Terere is a strong stimulant and tastes great, both in its traditional form as well as with the addition of herbs, juices or fruits.

Guayusa Pachamama Terere and its properties 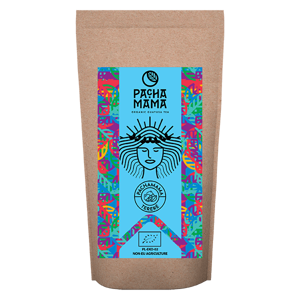