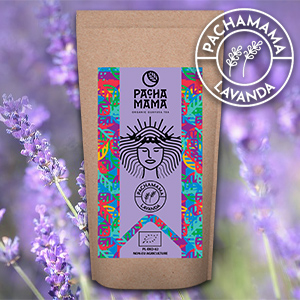 Guayusa Pachamama Lavanda – how does it taste?

Guayusa is a plant quite similar to yerba mate, yet it has much more subtle, slightly vegetal taste devoid of a bitter aftertaste. These features are the reason why guayusa perfectly blends with flavour and aroma additives. Guayusa Pachamama Lavanda is a delicate combination of the Provencal herb and Ecuadorian guayusa. This blend was completed by cornflower petals. It will be perfect for everyone who enjoys a strong stimulating effect on the organism combined with not so intensively bitter taste of the infusion.

Guayusa Pachamama Lavanda – properties and the influence on the organism

Guayusa is a plant rich in caffeine so it has a strong stimulating effect on the organism - even stronger than yerba mate! Guayusa has been used for hundreds of years by Indian tribes, especially before the overnight watch or huntings. Its task was to boost their concentration skills and remove signs of tiredness. Apart from this, the plant helps fight free radicals that are responsible for the process of ageing and the development of some diseases. Guayusa is a great option for everyone who studies, or does brain-work. It also supports cleansing the body of the heavy metals.

Lavender, on the other hand, is an ingredient important not only because of the aroma and flavour. It’s also a very important functional ingredient. Lavender oils are often used in aromatherapy because they have a soothing effect on the nervous system, and promote relaxation. Delicate note of lavender will soothe your nerves and help to calm down after a hard day. The plant stimulates the work of the immune system and is very useful in skincare. Cornflower petals boost immunity thanks to their antiseptic, anti-inflammatory and antifungal properties. They make the blend very rare - it has an unusual, delicate taste and vegetal aroma. We strongly recommend it to you!